Widely-travelled young trainer Damien Lane epitomises the values of the regional racing fraternity when he returns to his home town of Coonamble for a booming TAB Cannonball race meeting on Sunday.

Lane makes it an annual priority to support the Coonamble TAB Cup and Cannonball feature racedays, and his substantial team from Wyong is represented in most of the eight TAB races. 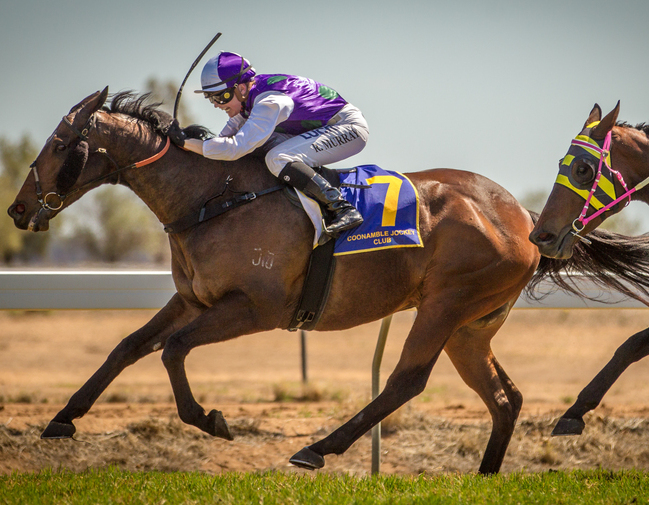 Lane’s racing passions were spawned as a schoolboy stablehand in a traditional regional racing family and he grew up in the same Coonamble street as the esteemed Lundholm racing clan.

So the emotions will be running high if Lane’s marvellous veteran Kanguru, the winner of the 2017 Cannonball, can defy age and the odds to upset the favourites in the prestige $35,000 Showcase feature (1100m).

A rising eight–year-old, Kanguru, with seven wins from an enduring 65-race career, remains a factor in his right grade. On the 54kg limit, Kanguru carries the same weight as when he won the 2017 Cannonball with his typical tenacious finish.

He’ll be ridden by Welsh jockey Ashley Morgan and Damien insists a barrier 12 outside draw is not a serious reversal.

“His racing pattern is to get back anyway, so it’s no big drama - it’s about finding the right run, and off a recent Gosford placing he can still be competitive,” Damien offered.

Damien is buoyed about “catching up with friends and family” as he is represented in most races with runners from his 35-strong stable at Wyong.

“I’ve won the Cannonball and the Crystal Sprint at home, the mission is still to win the Coonamble Cup, I’ve run a couple of placings but it’s the one race that has eluded me.”

Kanguru will be lengthy odds against the strongly fancied Just a Bullet from the Cavanough stable, the Morgan’s rails runner Mr Pumblechook and the Grills and Greg Ryan combination with Attila.

“I’ve got a few in the right races to be competitive, Scatter Blast races on pace, is drawn is drawn and race fit.”

Again the traditional meeting has attracted the strongest profile regional stables, and capacity fields are in most of the eight races.

Coonamble at present is rated a good 3 racing surface in fine weather.