Trainer Brett Dodson saddles up several strong contenders on his home track at Coffs Harbour on Friday and is particularly keen on the chances of Hellenism and two-year-old debutante Pace Stick.

His only other acceptor, Sawtell, will be scratched from the Benchmark 58 Hcp after running at Thursday's Wyong meeting. 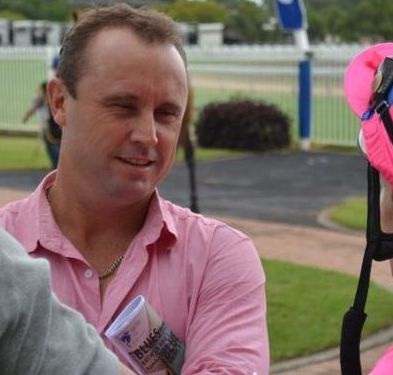 Dodson is looking forward to Hellenism - totally luckless on debut - running in the Maiden Plate (1405m) and watching Jet Spur gelding Pace Stick make his debut in the Maiden Hcp over 1205m.

Hellenism looked a certainty beaten when an eye-catching debut second to Tycoon Anna over 1200m at Coffs Harbour on May 31. The Helmet three-year-old filly powered home from well back in the field after being held up for clear running between the 600m and 400m.

“She’s a nice filly who was extremely unlucky on debut and I have no doubt she should have won,” said Dodson. “She got squeezed out at the start, then had one stop in front of her and drag her right back in the field.

“She will relish the step up to 1400m on Friday and I’ll be disappointed if she doesn’t win.”

Dodson has a very high opinion of the two-year-old gelding Pace Stick who he believes is headed for much better things next season.

By Jet Spur out of Public Display (a mare formerly trained by Dodson), Pace Stick looked very impressive in winning a Coffs Harbour barrier trial on May 31, breezing home over the 800m in 46.50secs.

“What he’s shown us so far he’s doing on raw ability and I think he’s going to develop into a pretty good three-year-old next season,” said Dodson.

“I plan to give him a break after just this one run on Friday and I expect him to improve much further next prep. I think he’s a horse who is definitely going places.”

Former Melbourne three-year-old Galway will be heading towards the $80,000 Grafton Guineas (1600m) on July 10 after he runs in Friday’s Benchmark 66 Handicap over 1305m.

Galway, formerly with Melbourne trainer Mick Price, won at his first two starts for Dodson - a Maiden over 1400m at Coffs Harbour on March 26 by two lengths and then a Class 1 over 1400m at Taree on April 30.

The Pierro gelding's only failure was his latest start on May 15 when he stepped up to 1800m in a Class 3 at the Sunshine Coast, finishing eighth on a Heavy 8 surface.

“He failed on the heavy track stepping up to 1800m at the Sunshine Coast last time, but I have no doubt he’ll eventually run a strong 2000m,” said Dodson.

“I gave him a couple of weeks in the paddock after his Sunshine Coast run to give him a nice freshen-up. He may find the 1305m a bit short on Friday but he’ll certainly be hitting the line strongly and the race will bring him on for the 1600m of the Grafton Guineas.”

Dodson’s team of runners on Friday are rounded out by In A Step, who resumes in the Maiden Plate (1005m) and Consoling, who tackles the Class 1 & Maiden Plate (2005m) and will have to overcome the outside gate.

Consoling broke through for his first win in 24 starts last time out when he bolted in with a Lismore Class 1 & Maiden Plate over 2100m, gapping his rivals by more than four lengths.

In A Step is resuming since being placed at her only two starts at Coffs Harbour back in December and January.

“In A Step will probably look the winner at some stage, but the last 50m might just test her out first-up,” said Dodson.

“Consoling took a while to break through, but that might be the confidence boost he needs, and often they can win a couple after they have finally landed that first win.”