Northam Confident Of Success With Filly At Taree

An awkward barrier will rule out topweight Cool And Neat from the feature race at Taree on Friday, but Scone trainer Rod Northam is confident he can still combine with jockey Robert Thompson to win an earlier race on the program.

Thompson was down to ride Cool And Neat in the $27,000 Wingham Service Club Wingham Cup (1600m) and the six-year-old looked one of the leading chances on his recent efforts since joining the Northam stable.

But the trainer's hopes were dashed when Cool And Neat drew gate 15, although he would have moved in a couple of slots if the emergencies don't gain a start. 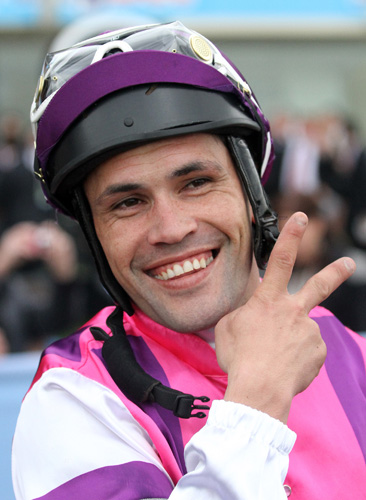 Michael Walker will make a guest appearance at Taree on Friday. Image by Racing & Sports

"It's still pretty hard to win out there around Taree and I've decided he won't be running on Friday," said Northam.

Northam, however, is upbeat about the prospects of his one runner at the Taree meeting - the filly True Finesse who runs in the Bakewell Haulage Class 1 & Maiden Plate (1600m).

The Fighting Sun three-year-old tackles the race third-up from a break and has drawn ideally in four with Thompson to ride.

"She looks hard to beat at her third run this time in and now stepping up to the 1600m which is ideal," said Northam. "And she won well at her one previous start at Taree."

True Finesse's previous appearance at Taree was back in December when she easily won her Maiden over 1600m.

She should be now spot on for another tilt at the 1600m on Friday after resuming on May 14 with an eye-catching fourth to Acoustix in a 1200m Class 1 at Tamworth and then a last-start sixth to Squared in a F&M Benchmark 58 (1300m) at Dubbo on May 27 when she was slow to jump.

Friday's Manning Valley Race Club meeting again honours champion jockey Corey Brown, the former local lad who has gone on to a spectacular career in the saddle, highlighted by Melbourne Cup wins aboard Shocking (2009) and Rekindling (2017).

He will be joined at Friday's meeting by fellow Group One-winning jockeys Glyn Schofield and Melbourne's Michael Walker.

Brown couldn't land a winner at last year's meeting, but looks to have some pretty good chances among his seven rides on Friday.

Brown will be trying to land the winner of the race named in his honour - Corey Brown Cup (1300m) - when he partners Maui Princess for trainer Angela Davies. And he will ride Cash Spinner for local trainer Ross Stitt in the feature race, the Wingham Cup.

Cash Spinner, previously with John Shelton at Grafton, had a good record at Taree earlier in his career, winning three of his six starts at the track.

His best Taree performance was his win in the Krambach Cup (1600m) in October 2016 - his most recent appearance at the track.

Cash Spinner made good ground late at his second run for Stitt last time out at Taree and can improve further stepping up to the 1600m on Friday.

The Paul Perry-trained Marathon could be an improver on Friday as he usually races well at Taree and at his most recent appearance at the track back on August 17 last year took out the Hopkins Livermore Cup over 1400m, beating Blinkin' Artie and Profiler.

Corey Brown's other rides include the first-starter Big Parade in the opening event, the 2YO Hcp (1250m). Trained by Clare Cunningham at Warwick Farm, Big Parade makes his debut off the back of a comfortable Rosehill 900m barrier trial win on May 24.

Brown also teams up with trainer Kris Lees with ex-New Zealand galloper Zaniah who could be one to watch resuming in the Maiden Plate (1000m). Zaniah, unplaced in his three NZ runs last year, is having his first run for the Lees stable and geared up for Friday's resumption with a strong Wyong barrier trial win on  May 22.

Glyn Schofield has five rides at the meeting, including the Port Macquarie galloper Gumshoe who looks hard to beat in the Benchmark 66 Hcp (1000m).

The Marc Quinn-trained three-year-old won first-up at Port Macquarie back in January, easily winning his Maiden over 1100m, and won at the same track two starts later when he took out a Class 2 Plate at a Showcase meeting on February 17.

Gumshoe was spelled after his next run when he sat wide without cover in a TAB Highway at Rosehill on February 23 before finishing a 4.2 length eighth to Zardoro.