Local Hero At $12 Ready To Cause Upset At Casino

Landmarks has won three of his four starts at Casino, including back-to-back wins in the Casino Cup (1400m) in 2017-18. His only defeat at the track was in last year’s Beef Week Cup when he finished a close fourth to Malmoosa on a soft track. 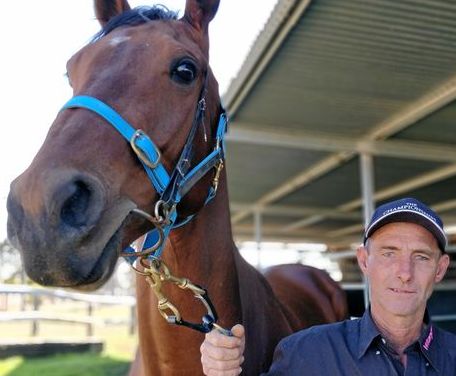 “Provided there’s no rain and it stays a good track [currently a Good 4], I think he should race very well again in Friday’s race.”

Landmarks tackles Friday’s event second-up after resuming at Grafton last Friday for a 4.4 length seventh to Dominant Crown (Queen Of Kingston was second) in the Brushgrove Cup (1215m).

That was the six-year-old’s first run since he finished off a pretty good campaign last year which included his second Casino Cup win, a victory in the Grafton Jacaranda Cup Prelude over 1100m, and another Grafton win in an Open Handicap (1400m) with 60.5kg.

He also finished second to Zamex in the Maclean Cup (1400m) during the Grafton July carnival and second again to Sniponet in the Bowraville Cup in September.

“And now that Eagle Farm is back racing I may head to Brisbane with him for a suitable race and we’ll also be aiming him for his third straight Casino Cup in August.

“I was happy enough with his first-up run last week at Grafton over the 1215m. He’d missed a bit of work because of the wet weather.

"I didn’t really care where he finished the other day, I just wanted him to pull up well, which he did. I’m very happy with him going into Friday’s race.

“Matt Paget knows him well and has already won a couple of races on him, so hopefully Landmarks can win another feature race here at Casino.”

“He’s going to drop 10kg on his last run and the way he finished off his last 400m last week, I think he should race well again in Friday’s race, although it’s obviously much tougher,” said the trainer.

The Daniel Bowen-trained Queen Of Kingston ($2.40 favourite) looks the one they have to beat in the Beef Week Cup following her terrific recent efforts.

Queen Of Kingston was having her first start in about six weeks when she was just touched off by Dominant Crown over 1215m at Grafton in the Brushgrove Cup last week.

Toowoomba trainer Lindsay Hatch accepted with two ex-Ben Currie trained gallopers in the Beef Week Cup - Apoloboom ($6) and Fomo ($6.50), who is also an acceptor at Eagle Farm on Saturday.

The pair had mixed luck with the barrier draw - Apoloboom, winner of two of his past three starts, drew gate 12 while Fomo jumps from the inside barrier.

Fomo wasn’t far away when he resumed for eighth behind Ef Troop over 1200m at Doomben on May 11, and should be right in Friday’s race stepping up to the 1400m.

One of the better bets on Friday’s nine-race program looks to be the Matt Dunn-trained Badoosh ($2.30 equal fav) in the opening event, the P & K Solicitors 2YO Hcp (1200m).

The Sebring gelding competed against the likes of Dubious and Exhilarates in Brisbane over the summer, then resumed at Murwillumbah on May 10 when he just failed to pick up Underwood over 1100m.

He clashes with Underwood ($2.30 eq fav) again on Friday, but meets him better at the weights this time and should be too strong over the 1200m.