Wounded Trainer Vows To Be Trackside At Wauchope (Saturday)

A trainer with a broken arm, a keen 26-year-old apprentice jockey newcomer, and a back from suspension jockey will provide plenty of interest and glamour to Wauchope Jockey Club’s charity race meeting in aid of brain cancer research at Wauchope this Saturday.

The Mark Hughes Foundation Day has been wholly sponsored and the local community has garnered plenty of willingness to make the meeting special at the Beechwood Road Racetrack. 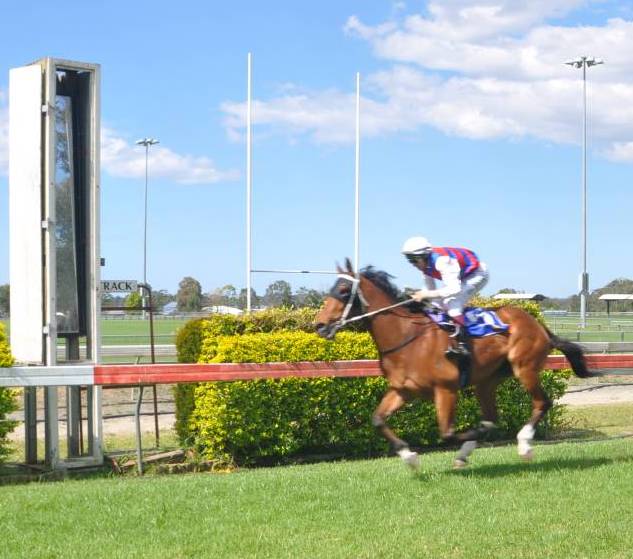 Racing action will be at Wauchope this Saturday. Image by Pete Daniels

Special raffles and possibly an auction on the day will also contribute to the fund-raising.

“I am very happy with the support and am invigorated by the talk around town about the meeting,” Partridge said.

The local trainer with the broken arm is Ronald Broomhall who is keen to start his five-year-old mare Dogoda Fury despite him nursing a plate and nine screws in his broken right arm, the injury inflicted when one of his horses kicked out with fright on April 1.

“I am a bit lopsided when I walk but I will be trackside,” he said.

Wanting to press her riding prowess is newcomer to the Wauchope stables of Colt Prosser, 26-year-old Georgina McConnell, an apprentice who has four wins to her credit in a short time.

Coming off a suspension for interference in a race at Taree on May 13 is Wauchope’s top jockey Belinda Hodder who always is hard to beat on her home track.

And one trainer bringing a couple of carloads of supporters is Kempsey’s Barry Ratcliff who has nominated several gallopers for the five-race card.

“I have only missed a couple of Wauchope meetings in 36 years of training and one of them was due to rain,” he said.

Ratcliff has called upon Grafton apprentice jockey Olivia Pickering to come south to ride at the meeting and on his horses.

More than 50 nominations from Gosford, Newcastle, Cessnock, the Mid North Coast up to Grafton have been received for the meeting.