Cleary Dining Out On Another Premiership Victory

“We’ll be having a nice lunch with the boy and girls” is how Queanbeyan trainer will be celebrating after posting his eighth premiership on his home course.

Cleary also landed the Horse of the Year title with Hard Core who won twice at Queanbeyan, also finishing runner-up on another occasion. 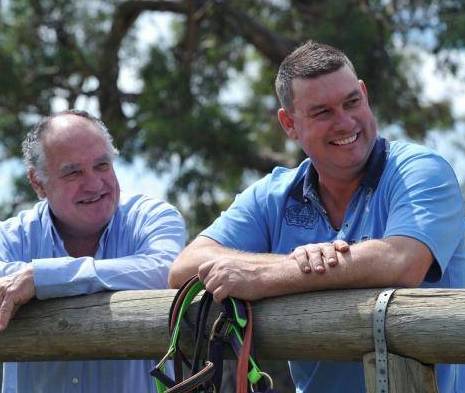 And to bring up the trifecta, Cleary’s stable jockey Jess Taylor scored the jockeys’ premiership, while leading apprentice was Billy Owen.

“Now that’s well-deserved,” Cleary declared. “Jess is an outstanding person and rider and tends to go under the radar.

“She travels everywhere for our stable and we’ve formed a great combination.”

Cleary gave updates on some of his better gallopers including Concrete, winner of his past four starts including a Highway at Royal Randwick in April.

“Concrete has gone to the paddock and we’ll be aiming him at The Kosciuszko in October,” Cleary said.

“He’s a really progressive horse and I believe there is a decent race in him.”

“Up Trumpz [last start runner-up at Warwick Farm] will be running at Kembla Grange on Tuesday before going for a spell.

“He’s been busting to win one with four straight placings and when he returns we’ll look at races like the Moruya and Bega Town Plates.

“Lucy Rose [winner of eight races from 17 starts] has just returned to work and she seems back to her old self after a couple of failures last campaign.

“In fact, she galloped really well with Noble Boy [Country Championships winner] the other day. She will resume in a 1000m race at Randwick on May 25.

“Kiss My Swiss [won three from four] and Girls Are Ready [won two city races from six starts] are both still in Queensland spelling and will return next month.

“Girls Are Ready is still eligible for Highway races and a long-range target is the Gold Coast Guineas early next year.”

Cleary said he has 15 horses on the books and has a capacity for 18 horses: “I don’t like to bite off more than I can chew so I kept the numbers to 18 max,” he said.

“I have some loyal owners and like to keep them happy without going overboard. There’s half a dozen babies in the stable so we should be in for another excellent season.”

The races are one of the feature events of the 10-day long Casino Beef Week Festival.

“We have an eight-race card with gates opening early at 11am,” said Renee Opryszko, CRC’s secretary/manager.

“It should be a great day of racing with the major event the $35,000 Casino RSM Club Beef Week Cup.

“There will also be a Fashions on the Field with prizes for Best Dressed Lady and Best Millinery.

“Entry to the course is $15 with tickets available to the VIP marquee for $88 per head.”

“We will be promoting the meeting as a family friendly raceday with plenty of amusements for the kids,” said MRC’s GM, Duane Dowell.

“The Hunter River Stayers Cup is a Benchmark 66 event run over 2300m.”