Port Macquarie trainer Marc Quinn has a few options to weigh up after his in-form gallopers Snitzel Reign and Nashian step out at Taree on Monday.

Quinn has the pair ticking over nicely since they resumed from lengthy layoffs earlier this year.

Three-year-old filly Nashian, winner of two of her past three starts over 1208m and 1250m, steps up to the 1400m for the first time in Monday's Benchmark 66 Handicap. 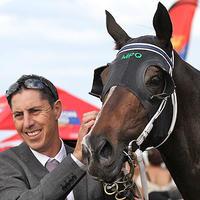 Snitzel Reign has had no luck at all with barrier draws recently, but has still raced well in his three starts since joining the Quinn stable.

The four-year-old has come up with another awkward gate (barrier 13) in Monday's Class 1 & Maiden Plate where he steps up to 1600m for the first time.

Quinn hopes both gallopers can emerge as Country Championships candidates next year and is also considering an upcoming Grafton carnival target for Nashian and a Sydney trip for Snitzel Reign for a TAB Highway at Rosehill next month.

"I'm hoping both of them can target next year's Country Championships, so I have to make sure I don't 'over qualify' them and they will then be eligible for the series," said Quinn.

"There's also a 1400m Class 2 TAB Highway coming up at Rosehill on June 1 that I want to tackle with Snitzel Reign and Nashian will have a week off in the paddock after Monday's race to freshen her up for a possible trip to Grafton for their Guineas Prelude (in late June).

"We have a few options to work out with both horses after they run on Monday."

A $120,000 yearling at the 2016 Inglis Easter sale, Snitzel Reign was originally trained in Victoria by Darren Weir but developed knee problems after his unplaced debut run at Warrnambool in November 2017.

"I believe he had to have knee surgery and had that lengthy break after his Warrnambool debut. A mate of a client of mine saw he was for sale last year and they were able to get him quite cheaply," said Quinn.

"He's a lovely horse but it's been very frustrating that he hasn't been able to draw a decent alley in any of his three runs for me."

Snitzel Reign resumed from his 16-month layoff with an eye-catching second to Lightning Ally in a 1208m Maiden at Port Macquarie on March 22 then broke through in dominant fashion at the same track on April 12, overcoming barrier 11 in the 13-horse field to charge away for 2.8 length victory.

The four-year-old drew the outside gate 14 at his most recent start at Tamworth on April 28 when he fought on bravely after crossing to sit outside the leader and finish a close third to Gentle Persuasion and Smooth Factor in a Class 1 over 1400m.

"His maiden win two runs back was very strong and I think if he'd have drawn a decent alley at Tamworth last time he probably would have won," said Quinn.

"Provided he runs out the mile on Monday, I think he should probably win. I don't think the mile will pose a problem, but you never know until they actually do it."

Nashian won on debut for Quinn on 24 December 2017 but 2018 turned out to be one setback after another and the filly only resumed racing in February this year.

"But maybe it was a blessing in disguise and the time off helped her mature. I don't think the 1400m of Monday's race will pose a problem for her, being by Scintillo."

Nashian, out of the Fastnet Rock mare Sakhra, is the first winner by the European stallion Scintillo who now stands at Glen Eden Stud in Victoria.

Scintillo, a Group One winner over 1600m in Italy and a Group Two winner over 2400m in France, was purchased by Australian interests to target the 2010 Melbourne Cup but was sidelined with a suspensory injury.

The former Godolphin galloper, a son of Helmet, won first-up for Sprague on April 12, easily winning a Port Macquarie Maiden over 1500m and then handled the step up to a Class 2 at the same track at his most recent start on April 26.

Chamisal has drawn ideally in gate four on Monday and should get the run of the race for jockey Robert Thompson.