He’s been sacked, sold and almost offloaded again, but the cracks in Concrete seem to be somewhat repaired as the Fastnet Rock gelding is an intriguing contender for the resumption of the prestigious TAB Highway series at Royal Randwick on Saturday.

There was no evidence whatsoever that Concrete ($5 on TAB fixed odds), discarded by astute Victorians Trent Busuttin and Natalie Young, bought on the cheap by Joe Cleary and put on the market again, would remotely be capable of winning successive NSW starts by a total of 13 plus lengths. 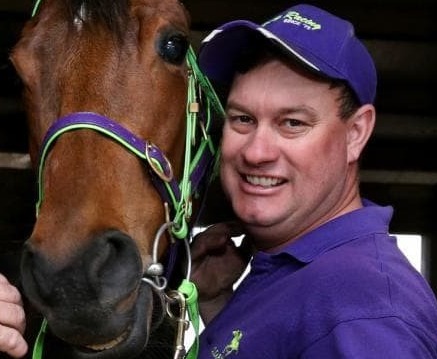 Early in his career it would have been ‘write your own ticket’ about long-time maiden Concrete being on show at headquarters on an elite Group day. And being ridden by a Melbourne Cup-winning jockey.

If his runaway recent wins came in a modest Queanbeyan Maiden and a Gundagai Class 2, Concrete is still laying the foundations for better grade into a TAB $75,000 Class 3, 1200m with 53kg for Kerrin McEvoy. All this after Concrete looked a hopeless cause with different stables who really know their business.

After tailing off at Bairnsdale in October and failing at Benalla in modest 1600m maidens, Concrete was sold to Cleary’s Queanbeyan stables.

Nothing changed. It seemed the wily Joe had uncharacteristically bought a dud, amidst successive defeats for Concrete in modest local maidens. Concrete also suffered the thumps.

In November, Joe reckoned Concrete had worked and trialled well enough for a “kill” in a weak 1400m maiden at home. Joe was confident and he was backed into a short $2.25 favourite.

However, after Concrete shot lengths clear on the turn but melted out of a place, jockey Troy Phillips was grilled by stewards.

In the end though, everybody again blamed Concrete. He’d exhausted Joe’s patience as he had with Victorian trainers.

A sale was arranged by Joe to Macau for Concrete but it fell through. As a last resort, Joe gave him a let-up and put Concrete back in the mix in sprints.

The result was spectacular with successive wins by panels ... over to Joe.

“Trent and I are good mates, this gelding was well-bred and showing them ability but not producing in races.

“Trent reckoned he might make a decent country stayer in a different environment. It took us a couple of tries to find out he just didn’t have the stamina to stay.

“And there were some issues. I went back into his breeding and on the dam’s side there were lines to Black Caviar. So sprinting was the only hope.

Concrete led and lapped them, albeit weak opposition: “Even when his race form was looking legless, he was working and trialling well enough to win in the right grade.

“Then we looked like selling him to Macau racing interests, but they came up short with the offer.”

Now Concrete is thriving: “He’s developed into a big lump of a good looker like Noble Boy. And when he’s worked with Noble Boy at home he’s stayed with him.

“When Noble Boy was on the way to winning the Country Championships they’d worked together just enormous. Off that he put two together.

“So he’s certainly deserved a shot in better grade. Young Toddy (Blowes) is my foreman and trackwork rider, rides them both in work.

“I was still ‘tossin’ up whether to go to Randwick or wait a week for a Highway at Hawkesbury. Then Toddy got off him and said ‘Joe’ if it’s Randwick this horse is ready to go."