Favourite Expected To Repeat The Dose At Grafton (Tuesday)

Dantga made an overdue return to the winner's list with a strong performance last start and looks a great chance to complete back-to-back wins on his home track at Grafton on Tuesday.

The Daniel Want-trained gelding will be chasing his fifth win at Grafton from 10 appearances when he lines up in the Credit Again Handicap (1206m). 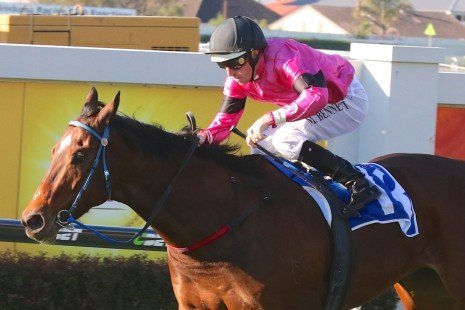 Dantga scores with Matthew Bennett aboard

Well-backed to run the $3 favourite, Dantga led throughout to beat Water Boy by 1.75 lengths.

Dantga does go up to 60kg on Tuesday, but has drawn well and on his home track should be very hard to run down again.

One of Dantga's main rivals looks to be the Gold Coast galloper Diamonds Are ($4.40) who is resuming.

Gold Coast trainer Michael Costa didn't fare too well with the barrier draws for his two acceptors at Tuesday's meeting, but Diamonds Are will be a definite runner from barrier 11.

However, Costa's impressive last-start Toowoomba winner Pistolero will not run in the Class 2 Hcp (1710m) after drawing barrier 14 and will instead run at Doomben on Wednesday.

"Diamonds Are was down to resume at Doomben last Saturday but he drew awkwardly there as well, so we decided to run in this race at Grafton instead," said Costa.

"He is capable of winning, but he is probably a run short of his peak."

Diamonds Are, originally with Gai Waterhouse and Adrian Bott, won four of his first five starts when he joined Costa's stable in 2017. On Tuesday, he is resuming since the spring when two of his three runs that campaign were well below expectations.

After a good first-up second to Just Orm in a Benchmark 75 over 1110m at Doomben on September 19, Diamonds Are finished unplaced at his next two runs on October 6 and November 3 before Costa decided to spell the gelding.

"He resumed really well but then his 'bloods' weren't right and there were a few little things that didn't go right, so I decided to spell him after just those three runs last prep," said Costa.

"But I think he's come back as good as ever. He's trialled pretty well and hopefully, he can go on and prove that he's up to city class."

Diamonds Are has had two barrier trials leading up to his return to racing, the most recent when he won a Ballina 1000m trail on March 16.

Another Gold Coast-trained galloper, Red Letter Day ($16), hasn't won for a long time but could be a chance at good odds in the Grafton race from a good alley (barrier three) and a likely soft track.

The Ben Hull-trained gelding's last win was in January 2017, but he has run some good races in his 24 subsequent starts.

Both his two previous Grafton runs have been good, including a close fourth to Zamex in the McLean Cup (1400m) during last year's July carnival.

Red Letter Day has had two runs this campaign, the latest when third to Publishing Power in the Dalby Newmarket (1200m) on March 9.