Former Brisbane galloper Argyll Bay gave Northern Rivers trainer Brenden Mackay a welcome return to the winner's list at Coffs Harbour last start, and looks an excellent chance to post back-to-back wins when he steps out at Grafton on Monday. 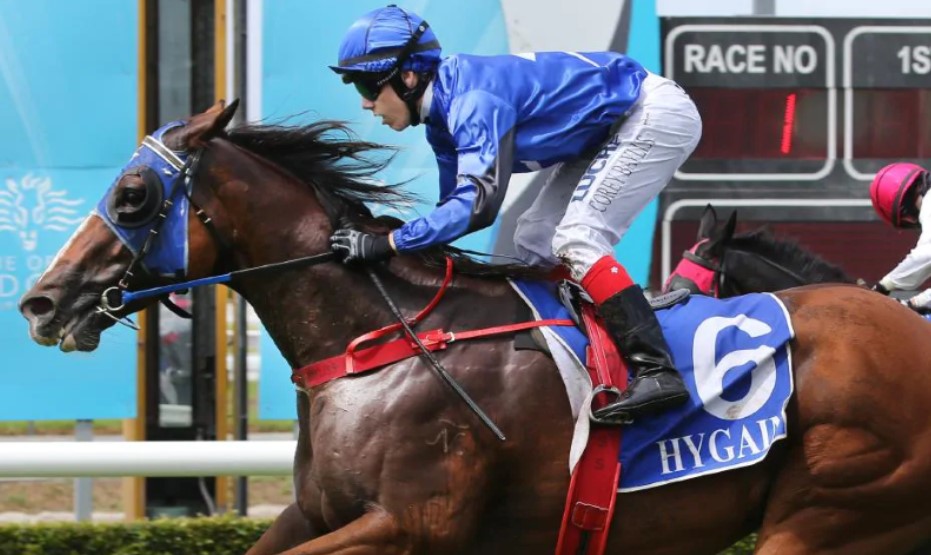 Argyll Bay [pictured left] stormed home to win a Benchmark 58 Hcp (1400m) at Coffs Harbour on March 12, coming from well back at the 400m to down Star Fest and Titus.

The gelding had put the writing on the wall at his previous start at Coffs Harbour on February 24 with an eye-catching second, powering home late behind the in-form Jenny Graham-trained Let's Rebelle in a Class 4 over 1350m.

Argyll Bay should appreciate the roomy Grafton track when he lines up in Monday's Benchmark 58 Handicap (1410m).

"He produced a very good run at his second start for me at Coffs Harbour when runner-up, then he 'franked' that run last start when he ran on very strongly for a good win," said Mackay.

"He's copped a 2kg penalty for Monday's race, which is to be expected, but I think it's a similar type of race and he should race very well again. He pulled up great after his Coffs Harbour win and the Grafton track should really suit him.

"I haven't done anything special with him since I've had him. I gave him eight weeks off after I bought him privately last year and just tinkered with a few things. He's a very happy horse."

Argyll Bay's last win at Coffs Harbour was Mackay's first winner since he saddled up Nardoo to win at Grafton on July 6, 2017 but the trainer hasn't had that many runners since then as he's been concentrating on buying yearlings and building up his stable.

"I've been buying three or four yearlings a year over the past three years. I have some great owners and currently have 10 horses in work. I should have about nine debutantes ready to race over the next six months or so, which I'm really looking forward to," said Mackay.

Mackay has a nice Pierro three-year-old filly, Melaina Rock ($7.50), making her debut at Grafton on Monday in the Maiden Hcp (1206m). Melaina Rock, from the US-bred mare Sandy Desert, is a half-sister to the winners Desert Fox (six wins in Singapore), Yuma Desert (four wins in Sydney) and Diamond Master (four wins in Hong Kong).

"I don't think the Pierro's generally show a lot early on, but she's a nice filly and it wouldn't surprise me if she gets into the finish on Monday," he said.

The well-travelled Mackay has been based at Grafton for the past couple of years, but has seen a lot of racing at home and around the world after working for leading stables in Australia and overseas, including a stint working for champion British trainer Martin Pipe.

"I spent six years in England and Ireland, and settled here in Grafton about two and a half years ago. I just love it here," he said.

"I train on a private property with a swimming pool and the Grafton region is just a great place to train horses. And, geographically, it is perfectly placed to take horses either north to Queensland or south to Sydney or the provincial tracks."

Gold Coast mare Elusive Melody ($1.65 fav) looks set to complete a winning hat-trick when she lines up in Monday's Class 3 Hcp (1206m), the opening event on the seven-race program.

The Toby Edmonds-trained mare is coming off a win at the Sunshine Coast in a F&M Maiden over 1000m on February 8 and a last-start victory at the Gold Coast on March 2 in a F&M Benchmark 65 Hcp over 1200m.

Elusive Melody will be Edmonds's only Grafton runner, with his two other acceptors, Duvessa and Sparkling Facet, kept for races at the Sunshine Coast and Gold Coast respectively over the past 48 hours.