Scone trainer Stephen Jones teams up with billionaire Gerry Harvey for a crack at next Sunday’s Country Championships qualifier with a horse that “should be unbeaten”.

Jones will be represented by the promising Hit the Target, owned by Harvey for whom he has trained horses for 30 years, in the $150,000 Hunter & North West Region Country Championships Qualifier (1400m) at Tamworth.

“Realistically, the horse should have won five races on the trot and be unbeaten,” Jones declared. 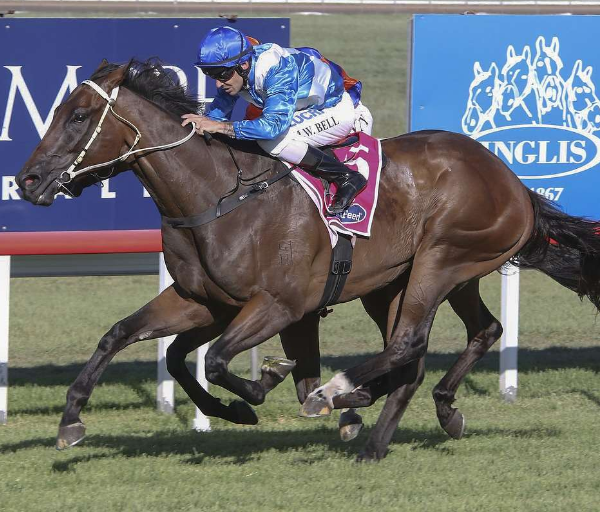 Hit the Target has landed the cash in three of his only five starts and Jones maintains there were valid excuses in the two defeats.

“He stood in the gates at Muswellbrook and missed the start on debut. He eventually finished hard for third and no doubt should have won.”

The four-year-old then went to Scone where he won two in succession over 1300m during December.

At his next run Hit the Target ventured to town where he finished fifth in a TAB Highway at Rosehill Gardens.

“He had a bumping duel with another horse 300m out and didn’t have luck in running; he then finished well [beaten 2.7 lengths].”

Jones then gave the horse four weeks off before running him at Newcastle [1400m] on February 16 where he powered home to score impressively.

“We freshened him up for that and he came home over the top of them to win,” Jones said. “He’s going great and is 100% for Tamworth. We’re going there with a fit and happy horse.

“He is on the way up and keeps improving and will relish getting up to races over 1600m and 2000m. “Tamworth is a tighter track than where he’s been running; I just wish it was at the roomier Scone.

“However, if they go hard up front he’ll be right on their hammer and hopefully finish in the top two to qualify.

“If he does make it through to the Final at Randwick he’s going to take beating as the 1400m there will be right up his alley.

“Mitchell Bell [ridden him two of the horse’s past three starts] is booked for another so I’ve secured Lee Magorrian to ride him.”

Tamworth Jockey Club has a huge afternoon planned for next Sunday with entertainment for the kids with pony rides, a Monkey Maze, face painting and a jumping castle.

“Headspace is aimed at the 12 to 25-year-old demographic and their centres act as a one-stop-shop for young people who need help with mental and physical health, alcohol and other drugs or work and study support.

“Westpac Rescue Helicopter Service volunteers will also staff our entry gates in exchange for a donation from our Club.”

View the race details for Tamworth on Sunday here