Ten days after Dean Mirfin watched his horses lock out the top two in Orange's Banjo Patterson Cup, he was watching a different pair of stablemates achieve the same feat on his home track.

The two Mirfin horses were almost having a match race by the time the rest of the field rolled past. That chase bunch was headed by Paris Crystal ($7, Mathew Cahill) who was almost six lengths behind runner-up Alcatran. 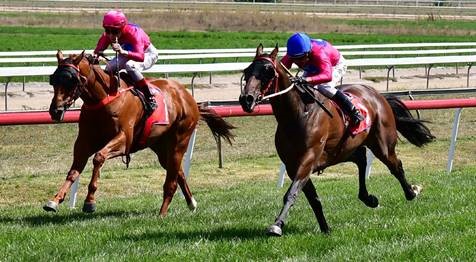 But the race was all about Mirfin's hopes. In fact, it was that way from the first few strides out of the barriers. Alcatran, as expected, drove through to find the lead while Ryan was keen to keep Electrified nestled near his stablemate.

Gaze Beyond sat in third along the rail before The Long Run and Paris Crystal began to move forward inside the 600m.

Mirfin's duo showed their class as the field straightened for home. Ings nudged Alcatran into action to see him bolt clear of the pack but Ryan looked very comfortable on the favourite.

Once he asked Electrified to go up a gear his ride responded in style, winning by a length from Alcatran. In what was virtually the perfect result for a trainer, the only thing Mirfin could have asked for was the pair to switch finishing positions.

"They're fun races to watch when two of them run away like that and you know that one of them is going to win," Mirfin said.

"The perfect scenario would have been Alcatran winning because that would have seen his benchmark be certainly high enough to get into the Country Championships.

"They're only three-year-olds, they're really nice horses and we need to look after them. Electrified is very progressive and this time in 12 months he will have won some nice races. We'll keep him on ice for a while and see what to do with him."

Alcatran is the only horse from Mirfin's four Country Championships qualifier nominations who is on the brink of missing out.

I Am Capitan, I Am Magnificent and Wordly Pleasure look certain to earn a spot in the $150,000 race at Mudgee this Saturday.  Acceptances for the race, which Mirfin took out last year with Cosmologist, will be released on Thursday.