Named after a Sesame Street character, El Mo will be out to provide Mudgee trainer Gayna Williams with her third successive runner in the $500,000 Newhaven Park Country Championships Final.

El Mo will line-up in next Sunday’s $150,000 Country Championships Qualifier (1400m) on his home track and a one-two finish will snare the four-year-old a berth in the Final run at Royal Randwick on Saturday 6 April.

The gelding is out of My Cookie Monster, one of Elmo’s friends on Sesame Street, hence the name.

El Mo has only raced on seven occasions for three wins and three placings, the horse having previously been trained by Danny Williams at Goulburn before being sent to Gayna at Mudgee. 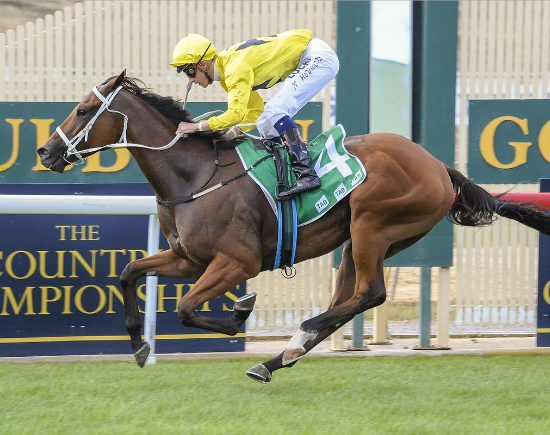 “The owner, June Baker, sent the horse to me to specifically concentrate on getting him into the Country Championships Final,” Gayna revealed.

El Mo scored at Goulburn 12 months back before having his first start for Gayna Williams at Dubbo (1100m) in December.

He finished a solid third in that race, making up good ground following a 10-week let-up.

El Mo then returned with a strong win from city placegetter Andy’s a Star at Orange (1300m).

“I was really happy with that performance as he went into the race without a trial,” she said.

“Greg [Ryan] was pleased with the win and is sticking with him so that’s always a good sign. I just hope his benchmark rating is high enough to get a run.”

El Mo has a bit of class having been placed in a TAB Highway at Rosehill Gardens in January last year behind The Lion.

Gayna has an able back-up in the Mudgee Qualifier, with stablemate Noel’s Gift.

The lightly-raced six-year-old was runner-up – in driving rain – in last year’s Championships Qualifier at Mudgee to Cosmologist.

Noel’s Gift was having his first run for 38 weeks when a closing fifth at Dubbo (1220m) on 3 February.

“I was happy with his first-up effort and he has gone along nicely since,” Gayna said. “He is an honest type who will improve sharply second-up.”

“Ashley is a good rider and he’s trying very hard. He’s also one that does his homework.”

Morgan is in form having ridden a winning double at Quirindi on 15 February.

Meanwhile, Gayna has ruled out a start in the Country Championships for the talented Healing Hands, winner of two of his only three starts, and was runner-up in the other start.

“He’s done a great job but is still a bit raw, so he’s now gone to the paddock.”

Mudgee Race Club is planning a huge day next Sunday with plenty of entertainment and promotions, according to the Club’s GM, Colleen Walker.

“We have an excellent promotion for someone to win – it includes a VIP package with entry to the NRL Charity Shield match on Saturday and then on Sunday, a helicopter ride to the races and a day in the VIP Championships Marquee for two.

“Live entertainment is Black Rose and Cirque M, and we’ll also have a roaming magician, Julian Bull. And there will be a bus operating from the Lawson Park, Oriental and Woolpack Hotels.

“We will also launch the season for the Mudgee Dragons with an auctioning of their jerseys. And the Rabbitohs and Dragons teams will be here along with the coaches and past players attending.

“It will be a real sporting family day out with a huge Fashions on the Field offering thousands of dollars of prizes including a weekend for two in Sydney, with flights and accommodation.”