The fortunes of horse racing are never more evident than with Wagga-based trainer Wayne Carroll, who will saddle up a “runt” and two “lovely” mares in Albury’s Country Championships Qualifier next Saturday.

“The Country Championships is a great concept and it’s there to be won – good luck to all competing,” Carroll declared. “It’s a big thing for country trainers and owners.

“It can all boil down to luck as you really can’t buy a horse for the race; it’s just a matter of what’s in your stable – last year I didn’t have a runner and this year I should have three!” 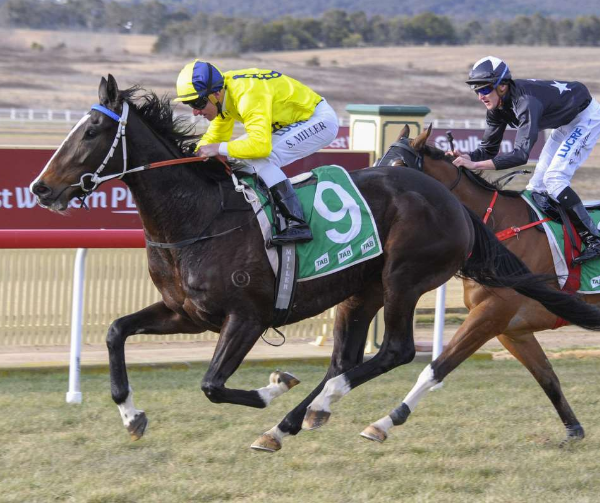 “It just goes to show you have to give horses a chance – when he arrived at my stables you wouldn’t have paid two-bob for him.

“He was a runt and was not going to be anything, a real slug. He had difficulty walking and breathing.

“But he’s now blossomed. Turned into a real little bulldog.”

“You can put a black line through his last start. Nothing went right; he was slow to begin then mustered speed and worked hard out wide the entire race,” Carroll explained.

“He’s an exciting prospect and a very relaxed horse; laid-back and you can put him anywhere in a field.”

Kayla Nisbet will be aboard the gelding, while Carroll’s other two chances are the mares Lady Mironton and Fashion Tip.

“Lady Mironton is coming along beautifully,” he said. “She was a touch unlucky first-up when she took a while to get clear and finished the race off well.

“She always comes on after one run from a spell and should be cherry ripe for next Saturday.

“She loves the speed on in her races and can clock some serious sectionals at the business end of a race.” Simon Miller will be aboard the mare.

Fashion Tip is Carroll’s other chance for the Qualifier: “She’s a real lovely horse and great to work with. She can sit back then sprint home.”

At her last run Fashion Tip worked hard from the 800m when trapped four-wide but to her credit, she kept coming, only for the winner (Duchess Moshe) to take the easy way home along the rails.

“She’s always been a trier, but her body has now strengthened, and she has filled out into a nice mare.

“She will also relish the speed that looks certain to be in the race and should be right in the finish.”

“We’ll have live music located trackside and in the beer garden, as well as the not-for-profit Sporting Clubs Sweep where $5,000 can be won.

“There will also be the Kids’ Entertainment Precinct with an increased variety of food vendors.

“The Trackside Marquee will be operating with some great hospitality, with free buses to and from the track to different locations around Albury.”