Trainer Claims Armidale Filly Will Be "Hard To Beat"

Awkward barrier draws didn't stop slick Armidale filly Rock The World from winning three straight races last preparation, so the inside gate at Grafton on Friday is a huge tick in her favour when she resumes over 1006m.

The Fastnet Rock filly, initially trained in Victoria by Shane Nichols for her first four runs, has won three of her five starts since she joined the stable of Armidale trainer Stirling Osland in mid-2018.

Rock The World will be out to bolster her record for Osland when she resumes in Friday's Become A CRJC Member Benchmark 66 Hcp (1006m). 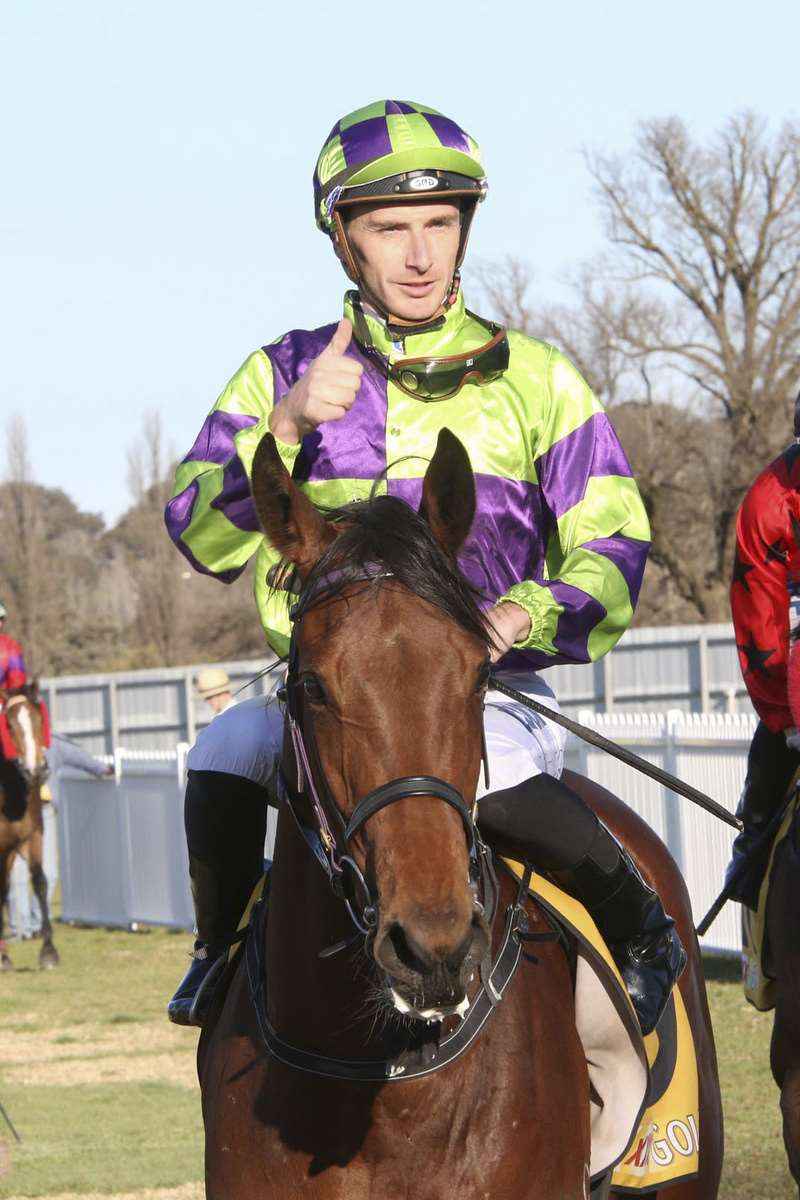 Ben Looker gives the thumbs up after winning on Rock the World at Armidale. Image by Bradley Photographers

Osland then took her Sydney for a TAB Highway Handicap over 1200m at Rosehill on November 3, but she weakened badly over the final 100m to finish last of 10 runners.

"She just didn't run out the 1200m at Rosehill before her spell and she may have been coming to the end of her prep anyway," said Osland.

"But she did a pretty good job overall during her last prep, winning three straight races despite drawing tricky gates each time.

"She drew barrier eight when she won her Maiden at Grafton and then drew the outside gates (barriers 11 and 13) at her next two wins at Armidale and Muswellbrook but was still able to win.

"She's got great speed out of the gates and this time she's drawn the inside barrier at Grafton on Friday, so she should be hard to beat. And as a three-year-old, she gets into the race pretty well at the weights."

Osland also nominated the filly for Friday's $40,000 Showcase Lightning Hcp over 1100m at Quirindi, but always favoured the Grafton race.

"I did nominate her for the Quirindi race as well, but that track can be quite firm, and I was always looking at the Grafton race as the best option for her return," said the trainer. "At this stage, we'll be keeping her to 1000m and 1100m races and let her work through her grades."

Rock The World's rivals at Grafton include the Coffs Harbour galloper Mr Hennessey, in-form Ballina sprinter General Nelson and Casino galloper Crooked Gent who won at his two most recent appearances at Grafton - over 1100m on October 30 and at 1200m on November 7.

The Steve Phelps-trained General Nelson is chasing a winning hat-trick after posting back-to-back Ballina wins over 1010m on December 26 and over 1000m on January 8.

Stirling Osland's only other Grafton runner on Friday is Leafy Green, who resumes in the Grafton Cup Day July 11 Class 1 Hcp (1006m). The filly won on debut at Armidale on June 5 last year and had to be spelled after her third race start when she resumed to finish seventh at Armidale on October 27.

"She had some fetlock problems after he first-up run in October, so I had to give her a break," said Osland. "She's overcome those problems and, although she's drawn a bit awkwardly (barrier 10) on Friday, she is capable of running a good race."

Brisbane trainer Steve O'Dea could play a strong hand at Grafton with a possible six runners on the eight-race program.

Too Hot To Hold, in particular, looks extremely hard to beat after her eye-catching third behind Portugese Tart when she resumed in Class 1 over 1200m at the Gold Coast on February 2, powering home from near last on the turn.