NOTE: A ‘celebration of Max’s life’ will be held at Mudgee Racecourse on Tuesday, 18 December 2018, commencing at 2pm.

The New South Wales Racing Industry is mourning the passing on Sunday of Mr Max Crockett, from Mudgee, aged 74.

“Max Crockett was a legend in racing and many will tell you he was the best horseman in the country,” said Racing NSW’s Chief Executive, Mr Peter V’landys AM.

“Some of the great trainers of our time entrusted Max to break in their horses and he always did an exemplary job. Max will be greatly missed by the industry and our thoughts go out to his extended family and friends.”

Max was an outstanding horse breaker, having broken in more than 7000 horses for all the best trainers including Bart Cummings, Tommy Smith, Neville Begg, Jack Denham and Les Bridge. 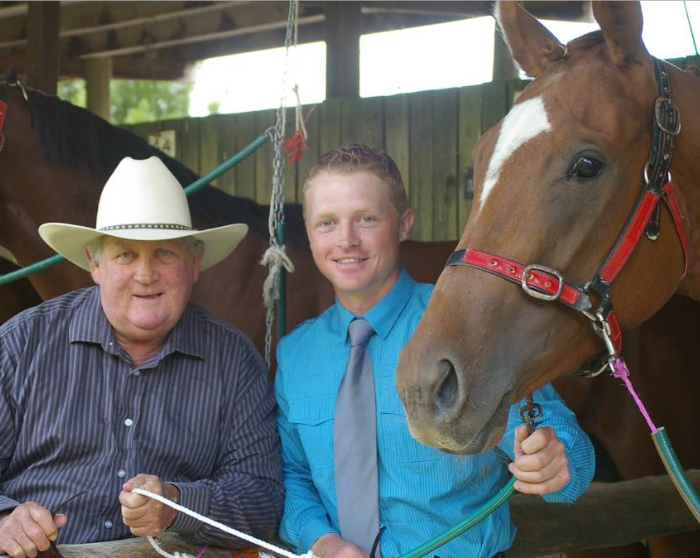 Max Crockett with his son, Cameron. Picture by Wellington Times

He also worked for Inglis before enjoying success as a trainer, winning races on each of the Metropolitan racecourses.

Max was also very fond of his last good horse, Lancelot, who won 11 races including two Gilgandra Cups (2013 and 2017) and finished placings at Warwick Farm and Canterbury Park.

Max’s daughter Yasmin said this morning: “Dad was a massive influence on Cameron and me; you don’t realise how well-respected someone is until they are gone.

“He was always great mates with Les Bridge and although he spent most of his later life in Mudgee, Dad’s heart was always with all his ‘old-school’ mates at Randwick.”

Max’s last ever runner was a winner – Mackellar’s Love at Orange on November 9: “I watched the race in the nursing home with Dad and that was a great thrill for him.”

Max’s son, Cameron Crockett, a top trainer in his own right, said: “I would like to thank everyone for condolences for Dad. He was a special man who touched the lives of many.

“Following a service in Mudgee, we plan to spread his ashes at Randwick Racecourse and the old Inglis sales complex.”