Stablemates Chipping Away But Winx To Reign Supreme

Trainer Chris Waller is set to again provide the bulk of the opposition for Winx when his superstar mare continues her farewell campaign at Randwick on Saturday. 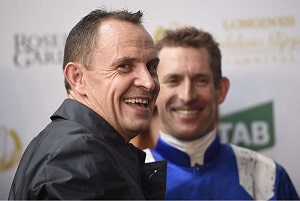 He said D’argento could possibly back up in the race as well in a return to Sydney after finishing last of 11 in the Group Two Peter Young Stakes at Caulfield on Saturday.

He said he was delighted with Winx’s progress since that race.

“She has come through her race really well and I can’t fault her,” he said.

“She had a gallop on Saturday morning and worked well within herself, hit the line strongly, and what you see is what you get, she’s just a class act.”

Waller said he believed Winx’s legion of fans appreciate that what they’ve seen from the champion over time is an extraordinary display of consistent excellence.

“People are understanding of how hard it is to win 30 races in a row,” he said.

Waller said Winx wasn’t overly taxed by her win in the Apollo.

“I didn’t think it was a really hard gallop, it was only from the 600 metres that they got cracking,” he said.

“Yeah, she was coasting, simple as that. She’ll improve with the run first-up and she’ll be better on Saturday.”

Waller said that rather than try to relax and enjoy each of Winx’s last three scheduled races from here, his focus remained on maintaining the champion’s wellbeing.

“It’s a case of getting the rest of the prep out of the way and making sure she stays trouble free,” he said.

“Every race has been so important over that 18-month period, from her third Cox Plate onwards really and during that we’ve had a fourth Cox Plate and now back for another prep.”

Asked if it was possible Winx could be even better this preparation, Waller replied: “I doubt it, because she hasn’t changed a lot.

“She’s just so dominant and she hasn’t been tested to the full extent in probably any of her grand finals, so unless something’s there to test her you’ll probably just see the same horse as we saw last prep.”

All things being well, after Saturday’s event Winx will go to the Group One The Agency George Ryder Stakes over 1500m at Rosehill on March 23 and finally the Group One Longines Queen Elizabeth Stakes over 2000m at Randwick on April 13.

It’s that time when the attention swings towards the two-year-olds, with just two months to the $5 million Longines Golden ...
Read More