Tough conditions for those giving away starts at Kensington on Saturday means there’s plenty of horses who should be forgiven for defeats but in defeat it was two promising fillies that said ‘follow me’ going forward.

They are John Sargent’s three-year-old Emeralds, fourth in the De Bortoli Wines Handicap (1100m), and David Payne’s two-year-old Montefilia who finished third in the Everest Carnival On Sale Handicap (1400m).

First to Emeralds, and Punter’s Intelligence sectional data showed the filly posted the fastest last 600m of the day running 35.10 and the fastest final 200m of the meeting of 11.93.

It was a race that produced the five quickest final 600m sectionals of the day with the winner Killin running 35.13 in leading throughout and fifth placed Sweeping Statement clocking 35.14.

Third placed Vulpine ran 35.22 and was responsible for the fastest splits from the 800m to the 200m while the runner-up and beaten favourite Tailleur clocked 35.33, who really struggled in the ground over the last 200m (12.30).

Emeralds is a work in progress distance wise but clearly 1200m and beyond will be right up her alley and if she can strike a track better than heavy we can expect her to go close second-up. 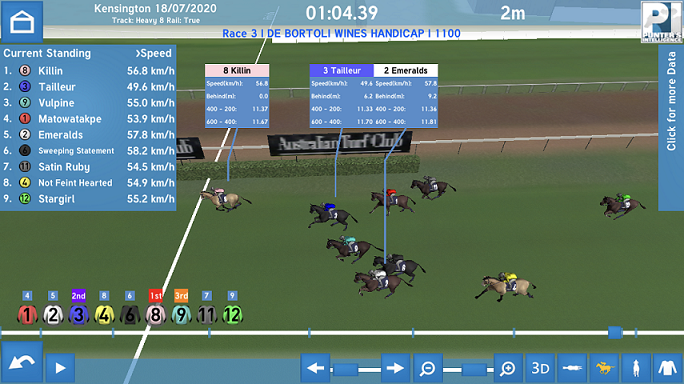 Montefilia is a filly trainer David Payne has pegged as a classic type in the new season so her first-up effort over 1400m, coming from last, is as good a start as he could expect to kick off.

There were three 1400m races at the meeting, all won by the early leader, and the youngsters did run the slowest (by about a length) of those events posting 1:25.23.

It says there wasn’t a lot between the three races overall and highlights Montefilia’s effort, while her race wasn’t run as hard early no horse in the other two races saw a final 600m under 36 seconds.

The TAB Live Vision Handicap (1000m) attracted plenty of pre and post race interest and it featured the sixth fastest last 600m of the meeting run by runner-up Prairie Fire (35.41).

Black Magnum was one of only three horses in the race to break 36, he ran 35.95 despite being held up for much of the home straight.

Out of the TAB Highway (1100m) it might be worth forgiving Skara Brae who ran a race best 35.93 in finishing sixth while there was a heap of merit in the third placed Blue Missile’s performance, running 35.99 after sitting wide without cover.

By Mark Brassel The fairer sex will be competing for future ‘dates’ during Friday’s Magic Millions Queen of the Valley ...
Read More

Please note races 7 and 8 at today's Tamworth race meeting have been abandoned due to the rain and deteriorating ...
Read More

'Nutcase' Wins If She Brings Her 'A' Game (Newcastle, Sat)