There’s no doubt in jockey Opie Bosson’s mind that star Kiwi mare Melody Belle is good enough to join rare company for a mare and carry the number one saddlecloth to victory in a Doncaster Mile. 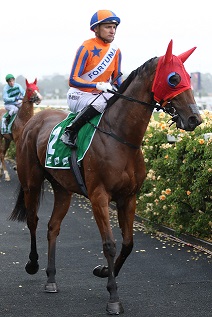 With 57kg and 10 Group 1 wins to her name Melody Belle will lead the field out at Randwick on Saturday as she strives to emulate the legendary Sunline who was the last mare to successfully sport number one when she lumped 58kg in that epic battle with Shogun Lodge in 2002.

Since then the only other mare to be top weight in a Doncaster is More Joyous when she ran 11th in 2011 (she returned to win the following year but Rangirangdoo had top billing).

Bosson said he’s not concerned about the weight in Saturday’s Group 1 $1.5m The Star Doncaster Mile (1600m) and while 'you can never be overconfident’ is expecting her to prove tough to beat.

“She is the type of mare who rarely runs a bad race and when you ride her she gives you 100 per cent all the time,’’ Bosson said.

“Her form shows that, not many horses win 10 Group 1s. She’s done that and she deserves to be up there.

“She’s such a laid back horse in training, she has a great will to win. From day one when she arrived (in Sydney) she’s been happy and sound and hasn’t missed a beat.’’

Melody Belle ($7.50 with TAB) is a lot better placed at the weights than it looks, however, with only 6.5kg over the limit.

The Jamie Richards-trained mare was originally allotted 55.5kg in the Doncaster but carries the 57kg because the weights went up 1kg due to measures introduced by the coronavirus pandemic then another 0.5kg on acceptances to ensure a 57kg top weight.

It’s been two years since Melody Belle last raced in Sydney and it’s fair to say we didn’t see the best of her as she was unplaced in two starts.

But she’s won nine of her 10 Group 1s since then, including proving herself in the Melbourne spring, and Bosson said everything about the make up of the Doncaster tells him she can show Sydney her true colours.

“I think the draw is ideal for her right in the middle of them,’’ he said.

“Hopefully I can get midfield with a bit of cover and hopefully she shows her sprint like she did in Melbourne.

“She’s pretty straightforward to ride in her races as long as she gets a bit of cover, if she gets into a bit of clear air she might tug along a bit.

“A bit of rain would be ideal for her. She can go on any track but when she gets her toe in the ground she is a lot more effective.”

As for her last start, third in the All Star Mile three weeks ago, it was one that got away.

“I got into a situation where the winner had me in a pocket and I couldn’t let her slide into the race and had to wait and clear the winner’s heels,’’ Bosson said.

“She still hit the line quite well.’’

The bonny mare Melody Belle really is something else!

The Empire Rose Stakes brought her Group 1 tally up to 10.... can she notch up 11 in the Doncaster? pic.twitter.com/jLSGbSO6xE

Meanwhile, Anthony Freedman’s Group 1 winning colt Super Seth attracted plenty of support after he drew barrier two in the Doncaster and assistant trainer Sam Freedman is expecting the three-year-old to improve on his Sydney debut in the George Ryder.

It hasn’t been an ideal build up for Super Seth who missed the Randwick Guineas and was left to play catch up in the Ryder where he ran sixth behind Dreamforce.

“When we look back on it he was probably a little soft in condition with the setback and break between runs,’’ Freedman said.

“He was starting to pickup late and Mark Zahra, who is usually pretty critical, said he'll run very well in the Doncaster.”

Robbie Dolan, striving to be the first apprentice since Patrick Payne in 1992 to win the Doncaster, rides Super Seth ($8.50) while Nash Rawiller, Doncaster winner on More Joyous in 2012, partners stablemate Homesman ($19).

Freedman warned the six-year-old shouldn’t be underestimated despite drawing a couple from the outside in the 20 horse field.

“He was probably a bit soft as well first-up. With his racing style he needs to be screwed right down so he's had three trials between his runs,’’ he said.

“He'll roll forward and will run a very bold race, it wouldn't surprise if he ran well at a good price.”

All the fields, form and replays for Day 1 of The Star Championships at Randwick